Effect of chlorambucil on potato subnormal germination and quality

Pro-Xylane is a sugar-protein hybrid made from xylose with anti-aging activity, which can induce the
biosynthesis of glycosaminoglycans in the superficial epidermis of the skin, promote the regeneration of collagen, and
is widely used in the cosmetics industry. In this paper, the preparation methods, biological activities and applications
of Pro-Xylane in cosmetics industry are reviewed.

The structure of hydroxypropyl tetrahydropyranitol, a xylose derivative with anti-aging actives, is shown in Figure 1. glycosaminoglycan (GAG) secretion, induce GAG and proteoglycan (PG) biosynthesis in superficial epidermis, promote collagen synthesis, effectively promote epidermal-dermal tight junctions, and make the skin stronger and more elastic. Moreover, PX is non-toxic, easily biodegradable and does not accumulate in living organisms, so it is commonly used in cosmetics. In this paper, we review the preparation, biological activity and application of PX in cosmetics in recent years, in order to provide information and reference for the research and development and utilization of PX. 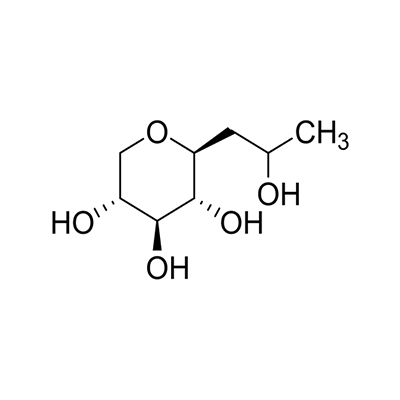 1.Preparation of PX
There are two main methods for the preparation of PX, one is the biosynthesis method, which has only been reported in a small amount of literature at home and abroad. Eddie Li, Gao-Gao disclosed a method for the preparation of PX by a one-pot method using biological enzymes, using xylose and isopropyl alcohol as substrates, under the catalytic action of isopropyl alcohol dehydrogenase, PX synthase, carbonyl reductase and coenzyme nicotinamide adenine dinucleotide to produce PX. Although the enzymes are specific and the purity of the products is high, the enzymes are difficult to select. The selection of enzymes is difficult, and enzyme proteins may be introduced during the reaction. The enzymes are difficult to select and may introduce enzyme proteins during the reaction, and some biocolloids may be produced.

A large number of production methods reported in the literature are chemical synthesis methods. cavezza et al. used xylose as raw material, condensation reaction with acetylacetone in alkaline aqueous solution, and then reduction of ketone carbonyl by the action of sodium borohydride to obtain PX. to avoid the complicated procedure of removing borates, Philippe et al. used D-xylose as raw material, condensation reaction with acetylacetone in the presence of sodium bicarbonate, conversion to C glycoside, and then the reduction of the carbonyl group by catalyst Ru/C to synthesize PX, the synthetic route is shown in
D-xylose can be sustainably sourced from beech trees, and the synthesis process is mainly a two-step process of C-glycosylation and catalytic hydrogenation, with environmentally friendly and low toxicity reaction conditions, which is regarded as the first successful example of green chemistry applied to cosmetics. This method realized the industrial development of PX, a new environmentally friendly active ingredient in cosmetics, and became the main production method of PX at present .

In the literature, PX is reported to be a structure-specific compound  with the (β, S) conformation as the dominant conformation and its biological activity is much greater than that of the mixture of (β, S) and (β,R) conformations. Its steric structure has become the focus of current attention and research.

3.Application of PX in the field of cosmetics

PX is applied to the skin with three major effects: anti-aging, moisturizing, and repair. The biological phenomena of skin aging can be divided into two categories: endogenous aging and exogenous aging. Endogenous aging is caused by internal physiological factors and manifests as fine lines, epidermal thinning, and dermal atrophy caused by aging. Extrinsic aging is the effect of all external factors on the skin, such as UV light, pollution, and cigarette smoke exposure leading to deep wrinkles, skin laxity, and capillary dilation. Over the past 20 years years, aesthetic medicine has made significant progress in the field of combating age-related skin aging. significant progress has been made in the past 20 years in the field of age-related skin aging, and effective treatments now include botulinum injections, skin laser treatments, Botulinum toxin injections, skin laser treatments, and topical skin treatments. The latter focuses on small molecules or natural extracts such as retinol, estrogen, growth factors, and antioxidants.
PX is a cosmetic product synthesized from natural xylose as a starting material. xylose as the starting material for cosmetic products, PX is widely used in many skin care products, including common creams and special nanoformulations. The effectiveness of PX has been proven in several studies.

3.1 Moisturizing and repairing effect of PX